In 2004, Anthony Casalena founded Squarespace as a blog hosting service while attending the University of Maryland, College Park. He was its only employee until 2006 when it reached $1 million in revenue. The company grew from 30 employees in 2010 to 550 by 2015. By 2014, it raised a total of $78.5 million in venture capital; added e-commerce tools, domain name services, and analytics; and replaced its coding backend with drag-and-drop features. It began trading on the New York Stock Exchange on May 19, 2021.[3] According to W3Techs, Squarespace is used by 1.9% of the top 10 million websites.[4] 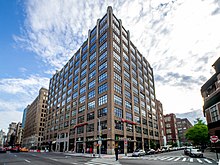 Current Headquarters of Squarespace in Manhattan

Casalena began developing Squarespace for his personal use while attending the University of Maryland.[5][6] He started sharing it with friends and family members[5] and participated in a "business incubator" program at the university.[6] In January 2004, he launched Squarespace as do it yourself/drag and drop website builder for the public,[6][7] with a $30,000 seed fund from his father,[8] a small grant from the university,[9] and 300 beta testers who paid a discounted rate.[6][10][11][12] At that time, Casalena was the company's sole developer and employee, and worked out of his dorm room.[6][11]

After the Unite the Right rally in 2017, Squarespace received a petition with 58,000 signatures and removed a group of websites for violating its terms of service against "bigotry or hatred" towards demographic groups.[24][25] In 2017, it raised an additional $200 million in funding, boosting its value to $1.7 billion.[26] This funding was earmarked for reacquiring interests from investors.[26]

In early 2021, the company filed paperwork with the U.S. Securities and Exchange Commission (SEC) to go public through direct listing on the NYSE under the symbol SQSP.[31][32][33] In March 2021, Squarespace raised $300 million in a round of funding led by Dragoneer, Tiger Global, D1 Capital Partners and Fidelity Management & Research Company with participation from existing investors. This funding round valued the company at $10 billion.[34]

Squarespace is managed by CEO and Founder Anthony Casalena. Other key executives are:[35]

As of December 2020, Squarespace had more than three million subscriptions.[33] Its users employ pre-built website templates, and a variety of drag and drop widgets to add elements such as text and images.[14] Its developers also create custom templates that are sold to users.[14] On-screen instructions walk users through things like search engine optimization and setting up e-commerce.[7] Its services are in direct competition with WordPress.com,[36] Wix.com,[37] Webflow.com[38] and other digital website building agencies.[39]

Squarespace was initially built for creating and hosting blogs.[10] E-commerce features, such as an integration with Stripe for accepting credit card payments, were added in 2013.[40] In 2014, more commerce features were added; a mobile version of the service was released; a separate facility was added for developers writing custom templates and features;[41] and a logo-creation app was introduced in partnership with icon designer Noun Project.[42]

In 2011, Squarespace was upgraded to version 6, with new templates, a grid-based user interface, and other enhancements.[14] Version 7, which went live in 2014, replaced its coding backend with a drag and drop interface,[43][44] and added integration with Google Workspace (formerly G Suite and Google Apps for Work) and Getty Images.[17] In 2016, Squarespace started selling domains, putting it in more direct competition with GoDaddy;[45] and added an analytics dashboard[46] and PayPal integration.[47]